The 2016 Hyundai Genesis brings new beginnings. The Genesis, having fully been renovated for 2015, now boasts a completely different look. 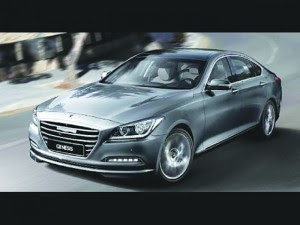 For 2016, the Hyundai Genesis has secured its place among many luxury vehicles — even with its appealing price ta — by bearing an elegant interior and various technological features.

While this year’s Genesis is not completely new, having already been redesigned last year, there are some minor but apparent changes to its exterior. The headline has changed as well as its headlights, which now come standard as HID as well as daytime LED lights. Additionally, the grille has been lowered and set wider. The most eye-catching feature of the Genesis’ exterior is its beautiful winged badge, which states its model name but does not allude to Hyundai.

What is most impressive is the Genesis’ interior. Everything in the Genesis is beautifully laid out and presented, which includes the controls. The driver can easily decipher the purpose of each of the buttons and can control them easily from the driver’s seat. Using high quality materials and simple, clean lines gives the interior an undoubtedly elegant and sophisticated feel.

The Genesis also is available in three packages: Signature, Tech and Ultimate with features such as panoramic sunroof, 14-speaker audio system, lane-departure warning, electronic parking brake, power trunk lid, matte-finish wood and aluminum trim as well as a carbon-dioxide sensor, depending on which package you get.

As far as performance, with either the V6 or V8 engine you’ll be guaranteed a powerful and smooth ride. The V6, which comes standard with rear-wheel drive and is available in all- wheel drive, boasts 311 hp and 293 pound-feet of torque. In EPA testing, the 2016 Genesis earned 18 city/29 highway mpg. The V6 is capable of 6.6 seconds zero to 60 while the V8 makes it in an impressive 5.3 seconds.

Hyundai also emphasized a safe ride, fitting the Genesis with antilock brakes, automatic crash notification through their Blue Link feature, SOS and roadside assistance. Most impressively, you can set boundaries for the car through their geo-fencing feature which, is perfect if you have young drivers in your household. You also can immobilize or slow down the car if it has been stolen. In government crash ratings, the Genesis earned five out of five stars

The 2016 Genesis has successfully pitted itself against several luxury vehicles by being a worthy competitor. Offering the same number of features and equally as elegant design as many high-end sedans while being very safe and powerful with an appealing price, the Genesis is a top contender for a high- end sedan.