CALGARY — Comfort is key in any vehicle Linda Heimlich might consider buying. And in the all-new 2017 Hyundai Elantra Limited, that all-so-critical comfort quotient clearly met her expectations.

“Getting into the driver’s seat proved to be an instant fit,” the Calgary driver said. “The eight-way power adjustable seat was very comfortable, and it also had adjustable lumbar control; I thought that was exceptional. The interior was finished in a fantastic creamy beige leather.”

But, Heimlich was disappointed to learn her passenger wasn’t also treated to a power-adjustable seat – instead, the co-pilot had a six-way manually adjustable chair. If a power adjustable passenger seat is a deal-breaker, not even the top-of-the-line Ultimate comes so equipped.

Available in six trims, from the base L to the fully outfitted Ultimate, Hyundai’s Elantra is now in its sixth generation. The automaker launched its best-selling nameplate in 1990, and the car has transformed from looking like a bland econobox to a well-styled sedan.

“I have to say, the overall appearance of the Elantra was very classy, and I’d go so far as to say it had a rich look to it,” Heimlich said. “The deep red paint had a great shine and it added to the overall impression of the car. The way the headlights were set up and the design of the grille gave the Elantra a solid look, too.”

Hyundai has said the style of the new Elantra is inspired by the “dynamic precision found in fighter jets.”

It’s the underlying architecture of the new Elantra that represents one of the most important improvements in the vehicle’s evolution. The chassis has been reinforced with 53 per cent advanced high-strength steel – up from 21 per cent in the previous-generation Elantra. The car now has increased torsional rigidity, ultimately improving how the car sticks to the road and how well it handles both smooth asphalt and rough gravel surfaces. 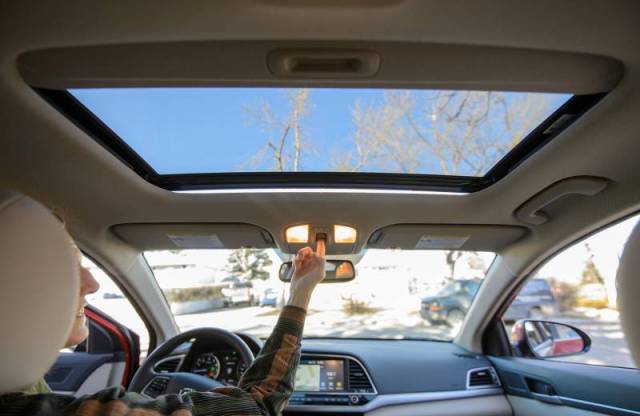 “It was a great ride and the Elantra felt very stable in all conditions,” Heimlich said. “I took some gravel back roads out of the city and the car felt great, very easy to control and very solid.”

Heimlich learned to drive in Georgia using the family’s standard-shift Datsun 510 sedan. Her first car was a Fiat 850, and she’s owned a little bit of everything since then, including a Mazda Miata and a Ford Windstar. She currently maintains a 2012 Audi A4 and a 2015 Nissan Micra. Besides comfort being a top vehicle buying consideration, she also cites handling and fuel economy as important aspects.

Although Heimlich appreciates good gas mileage, if she had a complaint about the Elantra it would be top-end power, or the lack of it, when attempting to pass at speed.

“The 2.0-litre four-cylinder engine was adequate most of the time, and it handled city and highway driving really well,” she said. “But, I think it felt a little underpowered when at speed, and you wanted just that little extra burst to pass another car.

“It was very responsive in city traffic and it was comfortable running along at 110 km/h on the highway, but asking for extra power when getting out and passing – it just didn’t have it.”

And that didn’t change when Heimlich experimented with the three drive modes, including Normal, Eco and Sport. In Sport mode, the handling tightened up and she enjoyed the increased tautness, but the engine still didn’t offer enough grunt for her liking.

The six-speed automatic transmission worked without issue, Heimlich said, and there were no complaints about the braking; it was easy to modulate and well up to the task of stopping the Elantra, even in a panic situation.

“They were very responsive and quick to slow the car down,” Heimlich explained.

There were no blind spots in the Elantra, and Heimlich found shoulder checking an easy task. She engaged the blind-spot monitoring system and said it worked very well.

Plenty of interior storage spaces and well laid-out cup and water bottle holders contributed to the overall utility of the Elantra. Trunk space was generous, with ample room for groceries or luggage.

“I personally think the Elantra would be a great family car,” Heimlich said as she handed back the keys. “There’s lots of room for four passengers, and it’s also nice enough for someone to use it as a work vehicle.

“You could easily drive it to a meeting or pick up a client and not feel embarrassed to have them in your car.”

Day One: The Elantra is a very nice-looking sedan. The driver seat is easy to adjust, with power controls and lumbar support options. The turn signal and windshield wiper controls were easy to reach and use. We took a tour on back roads to test long-range rides; the cruise control worked well but was slow to return to previous speed after slowing down. I am very impressed with how well it handled the gravel road stretch that we took.

Day Two: A couple of short trips today. The backup camera and tilting mirrors on both sides of the car were very effective. Backing into a parking spot was a breeze. I felt very confident knowing the car’s position and clearance between the cars on either side of the parking spot. Later, I headed downtown for a quick jaunt.

Day Four: Fully opened the sunroof and really enjoyed the fresh air this afternoon. I also checked under the hood. I liked the windshield wiper fluid reservoir location near the front of the car; it should be easy to fill, with lots of clearance from the hood. The oil dipstick was very easy to identify.

Day Five: My colleague complimented the look of the Elantra after seeing it parked at work. It is an impressive and solid-looking car. Even opening and closing the doors sounds solid.

Day Six: My passenger noted that there were ample cup holders available for both driver and passenger. There is ample interior storage between the front seats, doors and glove compartment. The push button “Mute” feature on the steering wheel is handy when having conversations in the car.

Day Seven: I drove in this morning’s rush-hour traffic. The Elantra handles very well in heavy traffic. I was really pleased with the visibility. I am still amazed at the effectiveness of the backup camera, especially in tight parking spots. At the grocery store this evening, I used the hands-free trunk-opening feature. This is a very nice option for shopping trips and anytime you need access to the trunk. There was enough room in the trunk to handle all the groceries plus!

I was impressed with how the Elantra handled both paved and unpaved roads. Its comfortable and functional interior made longer trips enjoyable and shorter trips a breeze. I particularly appreciated the driver seat moving back after a trip, then resetting automatically to the last driver’s settings. If I could change anything, it would be to add power to the passenger seat for anyone with mobility issues, and couple the fuel economy of the “Eco” mode with the better steering from the “Sport” drive option. This is a great family car with a luxury feel.