Back in February, Hyundai UK boss Tony Whitehorn told us that since the new Tucson went on sale last October, it had overtaken the i10 as the firm’s best seller.

From October to the middle of February, some 13,000 Tucsons were registered, well ahead of the 9000 predicted. Interesting.

Because — in case any extra evidence was needed — Hyundai is now being taken very seriously by UK buyers as not only a manufacturer of cheap and cheerful cars, but also of larger, plusher and more expensive models.

And, of course, everyone loves an SUV. Hyundai recently smashed through the one million sales mark in the UK and wants to be selling 100,000 a year here soon with a 5% market share, up from the 82,000 and a 3.5% share in 2014. Whitehorn has promised “no let-up” in trying to reach that goal.

Clearly, the Tucson, an SUV targeted right at the heart of the ever-popular Nissan Qashqai segment, is going to play a big part in it, and it is coupled with a desire for the firm to move upmarket.

So it had better be good. Fortunately, we’ve got the next few months to find out whether it is or not.

The Tucson is the new old name for the ix35. The Tucson was actually first made in 2004 as a rather forgettable SUV from the old Hyundai era.

In 2009 it became the ix35 in its second generation as part of a new naming strategy for Hyundai that clearly became confusing for those inside the firm as well as outside, because it has gone back to the Tucson name for the new, third-generation car.

At Autocar, we never actually ran an ix35 as a long-term test car, but it was a competent and likeable, if rather unremarkable, alternative to the allconquering Qashqai, which continues to go from strength to strength in its second generation.

Spec-wise, early tests of the Tucson have revealed it to be a bit of a mixed bag, but there’s clearly a standout model in the range: the 114bhp 1.7-litre diesel version in upper-mid-range SE Nav trim.

Early buyers agree, because this is the best seller. No surprise, then, that this is the model we’re running. 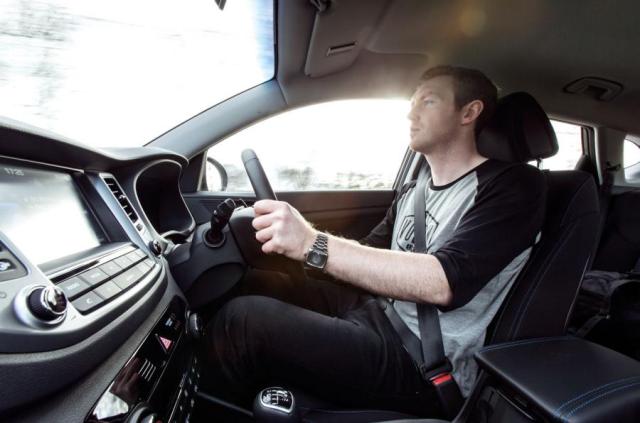 Although the 1.7 CRDi Tucson is a fair bit slower than my previous long-term test car, a 2.0-litre diesel Ford Mondeo, it shouldn’t require any more stops at the fuel station, if the specification sheet is to be believed.

Hyundai claims that 61.7mpg is possible on the combined fuel economy cycle, with an impressive 52.3mpg in town, while CO2 emissions are fairly low for such a large vehicle, at 119g/km.

We could have opted for the more potent 2.0-litre diesel engine, which comes with as much as 182bhp, but it’s not particularly swift (0-62mph in 9.5sec) and is quite a bit less economical (Hyundai claims 43.5mpg combined), so it sells in significantly smaller numbers.

There’s also the 1.6-litre petrol version, which has 130bhp, but 44.8mpg combined is all it can manage. And for a traveling photographer, fuel efficiency is key.

Admittedly, the 1.7 CRDi takes 13.7sec to reach 62mph and top speed is a measly 109mph, but buyers of this car are far more likely to be more concerned about visibility and safety than performance.

And on first impressions, it would seem that the Hyundai has these bases covered. Standard-fit driver assist features include a reversing camera that’s displayed on an 8.0in touchscreen, hill start assist, lane keeping assist and downhill brake control.

There are also six airbags, including side seat and curtain airbags. I’d run out of space if I were to list all of the other standard-fit features, but some key ones include satellite navigation, digital radio, cruise control and a speed limiter, Bluetooth connectivity, USB and aux-in connections, dual-zone climate control, heated seats and 17in alloy wheels.

In fact, the only option on our car is the Moon Rock Pearl paint (£620), so it’s fair to say that you get a heck of a lot of equipment as standard on the Tucson.

Compare this with, say, a Qashqai, where you’re looking at spending £1200 more before extras are added, and the Tucson begins to look like a bit of a bargain.

The Tucson has also moved on quite a bit from where its predecessor, the ix35, left off.

The old car’s cabin fell well short of its rivals’, but the fit and finish of the new Tucson’s interior is much more competitive. This matches the new car’s more comfortable demeanour, which is a result of the tweaked suspension settings.

No doubt this more forgiving ride will be put to good use when the Tucson is loaded up with Autocar camera gear, and it’ll be handy when I’m hanging out of the boot trying to capture some car-to-car photography.

First driving impressions have been largely positive, although I am having to adjust to a slow-responding throttle.

It’s as if there’s an initial lag when pulling away, and this encourages you to press the accelerator harder before the car then responds and lurches forward.

I suspect I’ll get used to it, but so far it has led to some fairly jumpy starts.

Conversely, the steering responds quickly and I’ve already felt the fast reaction times of the car’s stability control on a slippery road.

It’s clear, then, that there are many merits to owning a Tucson. I’m looking forward to finding out if there are any more.